Redfearn and Sons donation to the Mill Museum 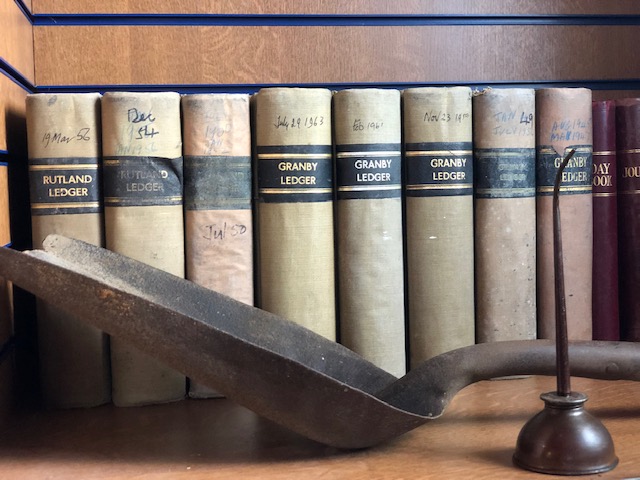 In November a donation was made to the Jordan Trust Mill museum. Russell Redfearn Walker, whose grandparents purchased products from the Mill, donated items which were used to make ‘Layer’s Mash’ a feed for poultry (Cecil Sale) and bread (John Walker & Sons).

Bill and Lindsay Jordan sat down with Russell to accept the donation and the families talked about the old Milling days, flour production and local connections.

More about Walker and Sons

In 1815 a general store was set up in the village of Sandon by John Adams, who died in 1857. In the late 1800’s it was taken over by John Boothby. The business was later purchased from Boothby by the late John Walker in 1917.

His sons, Redfearn (sic) and Jack became partners in 1925. His daughter, Ida, gained a financial share on her father’s death in 1927. Redfearn’s son, Redfearn John Walker, joined the business in 1946 and ran it until it closed in 1987.

The business operated a number of ‘rounds’ where bread and other goods were delivered to the surrounding villages, originally daily, then three times per week. The villages included Weston, Clothall, Rushden, Wallington, Sandon itself, Kelshall, Therfield, Buckland and Chipping. 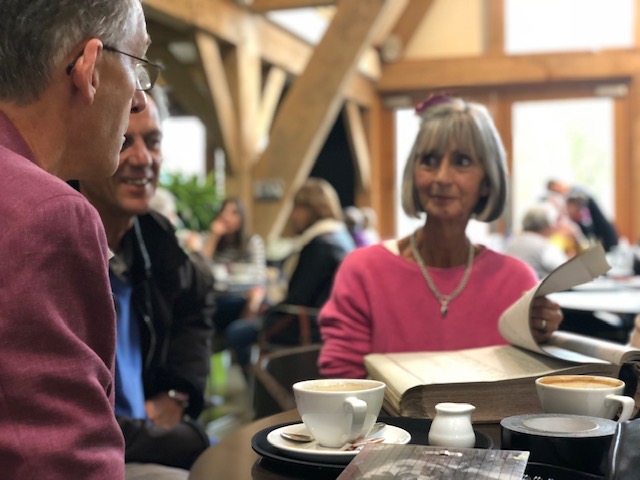 More about the items and what they were used for!

The oil can dates back to the 1920/30’s and is about 260mm high and has a ‘panting bottom’ for discharging the oil. Its vertical design means the liquid level is always below the joint minimising leaks. The long spout means that machinery can be lubricated without getting too near moving parts (In the days before health and safety).
It could have been used on any lubricating service, but in this case, on a large ‘dough hook’.

The shovel is about 970mm long and was originally supplied with the bread ovens which were fired with coke. Latterly, due to its useful shape, it was also used to mix maize, wheat and oats to make poultry food called ‘Layer’s Mash’. This was mixed with water to form a sort of cold porridge to feed hens producing eggs.

A number of invoices exist from 1888/89 showing purchases of flour from mills in the surrounding area. They also record deliveries of other goods showing the range of products being dealt with.

Baker’s bought flour of different grades from corn mills in their area. They would make various types of bread from their own recipe and from other commercially available recipes. Millers would also operate an early form of franchise on proprietary breads, selling the embossed baking tins, labels, bags as well as the ‘speciality’ flour.
The bread was delivered on ‘rounds’ i.e. journeys to customers around the area. The ‘Roundsman’ would carry a book (about 6” by 9”) where he recorded the bread and goods delivered and note any additional needs for the next delivery.

The columns headed B, F and S refer to Bread, Fancies (cakes) and Sundries (other groceries), but bread was often added in the F column.

Generally bread was noted as the type of loaf. The following key was used:

½ (a half) indicates one standard large white loaf

1 ½ (one and one half) indicates three standard white loaves.

Bread was made in different shapes – Tin, Bloomer etc. but as the flour volume was the same, so was the price. ‘S’ meant a small loaf using half the quantity of flour of a large white loaf.

Explanation of ½ symbol meaning one loaf

Sadly an explanation which ‘makes sense’ is not available. There are two possible explanations, taken from hearsay are described below.
The explanation handed down, father to son, was always that the bread dough was made from a ‘quartern’ measure of flour. This quantity of flour made enough dough to make two standard loaves – hence one loaf was known as ‘a half’

However the meaning of ‘quartern’ has been lost. One theory is that it was a quarter of a Stone (where One Stone = 14 pounds), but this would equal 3 ½ pounds (3 pounds and 8 ounces) of flour – too much to make two loaves of bread.

Another theory is that it refers to a quart jug (a liquid measure = two pints) of flour. This would give about two pounds of flour which is about right).

A third idea is that 3 ½ pounds of flour would need about a quart (i.e. two pints of water). This is complicated by the fact that old English flour needed more water. Wartime bread tended to use home grown wheat whereas modern bread (i.e. post war) used ‘strong’ flour. This was made from flour milled from imported American or Canadian wheat.

The speciality breads are easier to identify:

W = Wholemeal (with the bran (wheat husk) left in)

Bread was made in different shapes:

The donated items are on display in the Mill museum and can be seen on a guided or self-guided tour. Available Tuesday to Sunday visit www.jordansmill.com  for more.