Our visit to Jordans Mill by the Mills Archive Trust 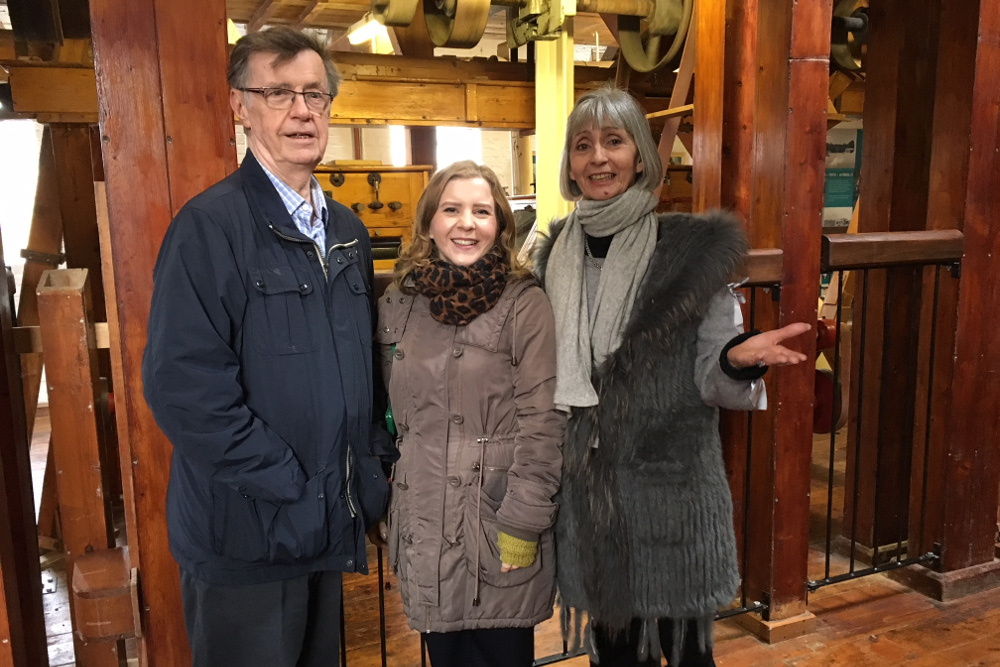 A few weeks we visited Jordans Mill in Biggleswade , where we were treated like guests of honour! Read on to find out more about this fascinating Mill and our trip there.

An introduction to the Jordans family

We met David Jordan and his sister Lindsay, who accompanied us on a tour of the Mill with volunteer Ray. I found the tour fascinating. As someone who has seen traditional windmills and watermills, and then most recently a large modern mill https://millsarchive.org/news/entry/188911/heygates-our-adventure-into-a-modern-roller-flour-mill#.WoQGpXzLiUl, this site showed me the interesting transition that took place in some country Mills from traditional stones to rollers.

The story of the Mill is also inseparable from the story of the family through the generations, and the interpretive material displayed at the Mill cleverly tells this story so that by the end of it, you feel like extended family! We also spent time with staff and volunteers at the Mill including a volunteer from their archive team, who all made sure we felt very welcome.

An introduction to Holme Mills

Holme Mills, as it is otherwise known, was first bought by the Jordans family in 1893. The family has a long history of milling and made an important name for itself, one that is still known today. That is in spite – or perhaps because of – early fires at the Mill. After the first fire in 1894, the Mill was rebuilt and some of the traditional millstones were replaced with a roller system. However, in 1899 the Mill suffered from even greater fire damage and was almost completely destroyed. Rather than giving up, William Jordan (3rd) and his brother Alfred replaced the waterwheel with the latest turbine and a new Carter Roller System, installed by Turners of Ipswich.

This modernisation of the Mill revolutionised what could be achieved. The Mill went from strength to strength and in 1950 the first Jordans branding appeared in adverts. In 1970, Bill (William 6th) and his brother David formed a new company, producing puffed wheat and then toasted oat cereals. Initially sold in health food shops, the company’s products took off in the mainstream and to this day we see supermarket shelves stocked with Jordans cereals and bars.

Keeping up with demand

To meet demand, a new factory was opened in 2000, producing almost 1 million packs of cereal per week. In 2005 the mill was closed but that was not the end of the story. The family wished to preserve the Mill for the public, and so Bill and David Jordan set up the Jordans Trust to look after the Mill and its surroundings. The heritage site has drawn visitors since 2013 and even on a cold February day, we could see why!