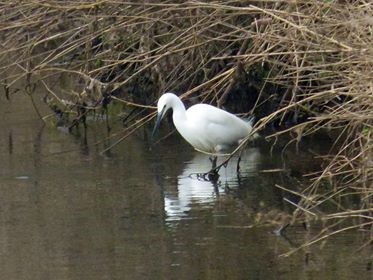 I love Nature and know a great place where you can sit, have a coffee and relax. You might even catch a glimpse of the aquamarine flash across the top of the water as the Kingfisher passes.

This small bird can be seen on the Willow tree near the waterfall and occasionally sitting on the wooden outlets of the decking area looking for some tiny minnows or sticklebacks to eat.

Another visitor that I have seen at the Mill is a pair of Little Egrets. I have seen them strolling around by the water’s edge looking for lunch.

They are like a grey Heron but all white and much smaller with a grey beak and yellow feet. They have been a regular visitor to the UK since 1989 and their numbers have been growing significantly since then.

The Little Egret is the smallest of three Egrets and is seen all over the UK. A Little Egret mainly eats fish and uses its feet to do something very clever, it wriggles them in the muddy riverbed and scares any fish that may be hiding to swim out and when it does, boom it grabs and swallows it whole.

Earlier this year two little Egrets were seen upriver but unfortunately they didn’t build a nest and breed.

We have 3 varieties of Egret in the UK, the Little Egret, the Great White Egret and the Cattle Egret. The largest of the three is the great White Egret which is about the same size as a Grey Heron.

They have black feet and a large long yellow bill which they use to spear fish, insects and frogs. The Cattle Egret which is slightly smaller and rarer has been visiting the UK in increasing numbers.

They spend a lot of their time close to livestock and grab insects and worms from the cattle’s feet. Cattle Egrets are white with grey legs and yellow feet. They have even been seen sitting on the back of cows.

Jordans Mill have a number of birds around their gardens including a friendly Robin, Dunnock and early in the morning you may eve see a Vole dart across the pathway in front of you.